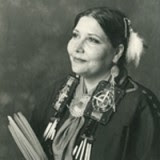 I have a propensity for rocks and stones much like a lot of people. They are fascinating. And, if you think about it, the fascination is strange. There are so many rocks and stones and most look very similar, yet we can find a "special" rock in a pile of identical ones. Do rocks and stones communicate with us? Some of us will say, "Yes, of course" and others will say "No, it's impossible". The following is what I found to be a basis for my belief.

If you have been exposed to the modern Lakota language you are aware the term for Creator is Wakan Tanka meaning "Great Mystery". But originally the term was Tunkasila (very ancient rock).

When the Christian missionaries arrived among the people, they were appalled by our use of "very ancient rock" as a term for God. They thought this was idol worship. They didn't understand that we weren't praying to rocks as God, we were using an analogy. A lot of dissension was caused by the use of this word. So, the people decided to change to Wakan Tanka (Great Mystery), a term the Christians could be more comfortable with.

We changed our language to keep peace. It's really sad that this happened. Ancient rock is such a wonderful analogy for the Creator. As it was explained to me, the rocks are the oldest living things on earth. They were here first and have much wisdom and knowledge because of this.

So, when we find that special rock in the midst of a pile of similar ones, is it talking to us? I think so.

P.S. There is a museum in South Dakota where large round rocks move by themselves. The curators placed them in sand so we could see the trail of their movement. As far as I know, there is no scientific explanation for this.

Posted by barb@starmerge at 8:38 PM 2 comments: