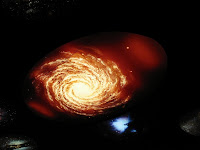 UFO sightings in New York have captured the attention of the news networks and crowds of people.

I reviewed 27 of these reports and found two dates that I would like to share with you.

The first incident occurred in Manhattan on October 13, 2010. This was a daytime UFO sighting witnessed by hundreds, if not thousands, of people.

In a somewhat surprising departure from the normal routine this sighting was actually covered by local news networks.

In the early evening, a reporter at the scene from Fox News said she noticed a bright light in the sky. At first she thought the light was a star. However, after her cameraman zoomed in on the object, a tail and blue flashing lights were visible. There was no way for her to determine if this was one of the objects people had reported earlier in the day.

Eye witnesses during the daytime event reported seeing up to 50 objects in the sky. As time passed, the objects disappeared until finally they were all gone in the late afternoon.

It is believed the daytime objects were balloons released as part of a celebration in Times Square. However, the real interest here is the bright light in the evening sky reported (and captured on video) by the news station. Surely, if this was a simple balloon one would think it would not have blue flashing lights on it. And why would only one of 50 balloons remain visible for hours after all of the rest had blown away?

In my opinion this report is inconclusive. Something was indeed in the sky over Manhattan that evening. Was it a balloon or was it something else?

The second UFO sighting in New York occurred in Orchard Park (southeast of Buffalo) on the afternoon of November 11, 2010.

An eyewitness reported watching an object that appeared to alter its shape. The sighting lasted for six minutes. The eyewitness took five photographs of the object as it appeared to transform from a solid state to that of light or energy.

The incident was reported to the Mutual UFO Network (MUFON) where it was logged in their database. You can confirm this sighting at their website.

At least two people witnessed the object firsthand according to the report. The witness stated that it was actually their boss who first noticed the object in the sky.

As of December 14, 2010 I have not been able to confirm the existence of the photographs being submitted to MUFON or published online. Eyewitness statements are definitely worth noting but I greatly prefer more tangible evidence in the form of video or photographs.

Article Source: [http://EzineArticles.com/?UFO-Sightings-in-New-York&id=5556607] UFO Sightings in New York
Posted by barb@starmerge at 11:37 AM No comments: